Many people now like to have the option of having a BBQ while camping.  As we don’t always get long hot summers here in the UK when we do get some good weather, we do love a BBQ and that includes when we are away

Yes, we campers do mostly cook outside while away camping, normally on gas stoves or cookers or even electric hobs if we are using EHU (electric hook up) but there is just something about a BBQ that makes dinner time that little bit better.

In this post, we are going to look at the foldable BBQ from Gelert with a storage case and integrated cooler beg.  We have come to love this little BBQ as we use it for more than what it is advertised as, as it is quite a versatile little thing.

The BBQ and Carry Case

One of the first things that we liked about this is that it comes in its own little storage bag.  This little bag is cleverly designed with an integrated cool bag. Handy for storing your burgers, bangers and steaks and keeping them cool till it is time to start cooking. 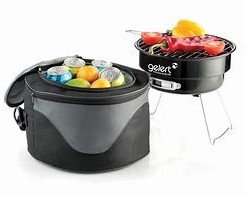 Now, these aren’t huge but suit couples and small families. With a cooking surface diameter of just 26cm you are not going to be able to feed a large group, but you can easily cook 4 good sized burgers at a time. This also means that it is lightweight at only 820gms.

This BBQ has folding legs which lock into place when opened to save any accidents of falling over.  This also means that it will not scorch grass or any other surfaces underneath while cooking. Not that I really need to say but NEVER have a BBQ inside or in an enclosed space.

The BBQ bowl which is enamel also has its own little air vent at the bottom that can be adjusted to suit your cooking requirements. It also has 2 chrome plated grates, one inner grate and one on top for cooking on.  There is also a little grate tong included so you can lift grate off should you wish to add more fuel while cooking.

This retails for around £25 but can often be bought cheaper if on sale. We managed to buy ours new for £14 and it has been well worth the money.

Now as we said above this is quite a versatile little thing.  We did originally buy ours as a BBQ as an addition to our camping kit. And the first time out we did use it as such on the campsite.  As the weather was surprisingly good on that day, we then later used it as a small fire pit as we sat out later into the night.  This was due to the site only allowing fires if using a fire pit, which we didn’t have, and this was just a nice size for a little fire for us.

Since then we have used it many times more like a fire pit, probably more than we have as a BBQ, to be honest.  We have also cooked meals on it as it’s big enough to hold our pots or 2 mess tins when we are wild camping.  After cooking our meal for the evening, the kettle is normally next to be put on for a cuppa and after that, we take the top grate off and use as a fire pit for the remainder of the evening.  It is also great as the kids love to roast some marshmallows or make some toast on it later in the evening for a snack or supper. 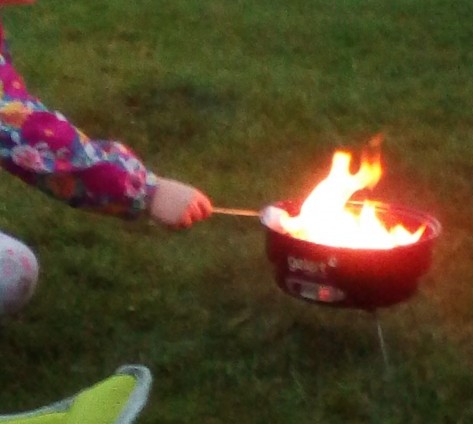 The next morning, we simply empty it out, fold the legs away, place it into a reusable plastic bag and put it back into its carry case.  This saves the case from getting dirty and means that it can easily be pulled out on the next trip and is ready to use.  If it is particularly dirty, we will just wash it out on our return home.

As you can see, we love this little BBQ and will continue to use it in the way we have for the foreseeable future. Its lightweight, big enough for us and the integrated cooler bag is a great bonus.

Not only is this an ideal compact BBQ for camping but would also suit if you were going on day trips, to the beach, fishing or festivals.

So if you want a BBQ for your camping trips and don’t want to fork out for a larger gas one or simply don’t have space for a larger one this is a great wee starter BBQ.

Since writing this post the Gelert BBQ’s have stopped being sold on a few sites, maybe they have been discontinued.  But if you like this style of BBQ that has it’s own carry bag and cooler do not worry there are other manufacturers that sell this style and are also from names you can trust.  Here are another 2 options, both come complete with carry bag and integrated cooler just like the one reviewed.